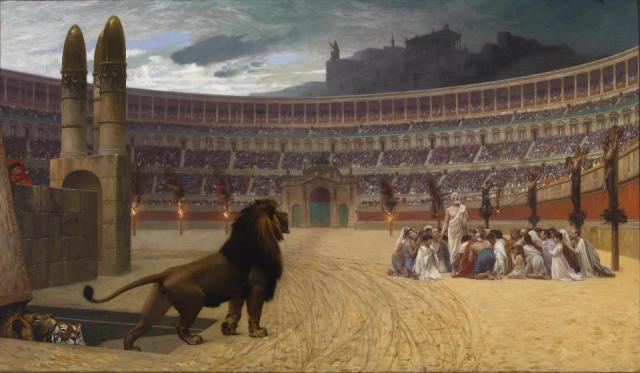 “And to him they agreed: and when they had called the apostles, and beaten them, they commanded that they should not speak in the name of Jesus, and let them go. And they departed from the presence of the council, rejoicing that they were counted worthy to suffer shame for his name. And daily in the temple, and in every house, they ceased not to teach and preach Jesus Christ.” – (Acts 5:40-42)

“But the more they afflicted them, the more they multiplied and grew. And they were grieved because of the children of Israel.” – (Exodus 1:12)

Persecution has a strange way of producing the opposite outcome the what was intended by those that are doing the persecuting. In our text, Peter and John are preaching the gospel of the Lord Jesus Christ until they are arrested by the religious leaders and put in prison. They are released the next day, but only after they are threatened. They go right back to preaching, because they believed that God’s command to preach superseded any human law. They are again arrested, but are miraculously removed from prison by the Angel of the Lord, only to go back out and preach again. The religious leaders don’t know what to do about these trouble makers, so they arrest them again; and they release them again, but this time before they are released, they are beaten. We can see that things are certainly starting to heat up for the apostles. In chapter 7 we will see that things will heat up even more, when Stephen is put to death for preaching the gospel.

It is the same way in the world we live in today. Christianity is thriving in some of the most unlikely places. Did you know that it is estimated that the actual number of Christians in communist China is said to be more than the number of Christians in Europe and America combined; and most of the churches in China are operating illegally, underground. Many Christians have been imprisoned in China for their faith; yet the Christians keep coming.

Now let’s consider America. We have freedom and prosperity here; but it seems that we are spiritually dying in most places. Maybe the churches in America would benefit from a little persecution. Does that sound strange to you? Don’t misunderstand. I am not wishing or asking for persecution; but I am willing to ask the Lord to do whatever is necessary to wake the churches in America up, even if it includes some persecution.

Amen Pastor I agree with you,I think a little persecution would wake up the church’s.I just
read a article that the church’s are still at 35 to
50 % less people in there congregation.People
are creature of habit they can watch services on tv in the comfort of there home while in bed or there easy chair go to the refrigerator to get a
bite to eat they don’t have to get ready for church or drive to church.don’t get me wrong there are people that have medical issues. Let’s not forget the assembly of ourselves together.
like the post.

People have a habit of taking things for granted. If it was not easy to worship then the churches would realize and appreciate the amazing gift we have. I really believe this.

amen to your responses Bob and Terra