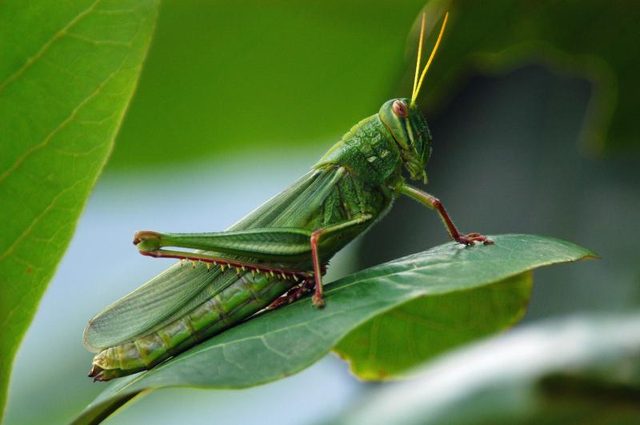 Read the “0206 Evening and Morning“ devotion for today, by the late Charles Haddon Spurgeon.

“And John was clothed with camel’s hair, and with a girdle of a skin about his loins; and he did eat locusts and wild honey…” (Mark 1:6)

Good morning. Have you had breakfast yet? And I don’t mean to “bug” you about this, but did you know it was okay to eat locusts if you were Jewish. The Jewish dietary laws were strict, but locust is on the menu. Look at the picture above. The Greek New Testament word for locust means: as pointed, or as lighting [LANDING] on the top of vegetation. But God doesn’t make mistakes. Did you know that locusts are 50% to 60% protein and only 12% fat? And the fat breaks down to 44% saturated fat, and 54% unsaturated fat (2% other). As a plus, the carbohydrates are very low making them great for the Atkins Diet. Some people describe cooked locust as similar to smoky flavored bacon and reasonably tasty. And, like I said, God doesn’t make mistakes: He wanted His children to have a well balanced diet of things that were good for them.

“And the LORD spake unto Moses and to Aaron, saying unto them, Speak unto the children of Israel, saying, These are the beasts which ye shall eat among all the beasts that are on the earth. Whatsoever parteth the hoof, and is clovenfooted, and cheweth the cud, among the beasts, that shall ye eat.” (Leviticus 11:1-3)

It would appear that the fowls of the air that you could not eat were scavengers: they ate the remains of dead creatures. And all this seams to be a good thing if you want a healthy diet. Just remember that we, as Christians are not under the Law, we were given these guidelines…

“For it seemed good to the Holy Ghost, and to us, to lay upon you no greater burden than these necessary things; That ye abstain from meats offered to idols, and from blood, and from things strangled, and from fornication: from which if ye keep yourselves, ye shall do well. Fare ye well.” (Acts 15:28-29)

“On the morrow, as they went on their journey, and drew nigh unto the city, Peter went up upon the housetop to pray about the sixth hour: And he became very hungry, and would have eaten: but while they made ready, he fell into a trance, And saw heaven opened, and a certain vessel descending unto him, as it had been a great sheet knit at the four corners, and let down to the earth: Wherein were all manner of fourfooted beasts of the earth, and wild beasts, and creeping things, and fowls of the air. And there came a voice to him, Rise, Peter; kill, and eat. But Peter said, Not so, Lord; for I have never eaten any thing that is common or unclean. And the voice spake unto him again the second time, What God hath cleansed, that call not thou common.” (Acts 10:9-15)

Tinjiya (Tswana recipe): remove the wings and hindlegs of the locusts, and boil in a little water until soft. Add salt, if desired, and a little fat and fry until brown. Serve with cooked, dried mealies (corn).

Sikonyane (Swazi recipe): prepare embers and roast the whole locust on the embers. Remove head, wings, and legs, in other words, only the breast part is eaten. The South Sotho people use locusts especially as food for travellers. The heads and last joint of the hindlegs are broken off and the rest laid on the coals to roast. The roasted locusts are ground on a grinding stone to a fine powder. This powder can be kept for long periods of time and is taken along on a journey. Dried locusts are also prepared for the winter months. The legs, when dried, are especially relished for their pleasant taste.

Cambodia: take several dozen locust adults, preferably females, slit the abdomen lengthwise and stuff a peanut inside. Then lightly grill the locusts in a wok or hot frying pan, adding a little oil and salt to taste. Be careful not to overcook or burn them.

Barbecue (grilled): prepare the embers or charcoal. Place about one dozen locusts on a skewer, stabbing each through the centre of the abdomen. If you only want to eat the abdomen, then you may want to take off the legs or wings either before or after cooking. Several skewers of locusts may be required for each person. Place the skewers above the hot embers and grill while turning continuously to avoid burning the locusts until they become golden brown.

Peace! (“Then Peter opened his mouth, and said, Of a truth I perceive that God is no respecter of persons: But in every nation he that feareth him, and worketh righteousness, is accepted with him.” (Acts 10:34-35))

Posted in Devotions by Pastor Ted Stahl with no comments yet.
0 0 vote
Article Rating
Subscribe
Login