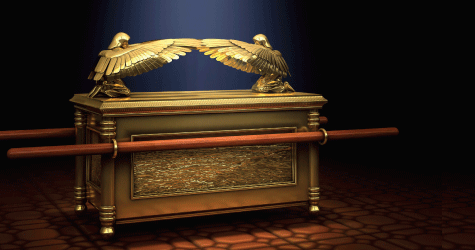 Read the “0330 Evening and Morning” devotion for today, by the late Charles Haddon Spurgeon.

“So they sent and gathered together all the lords of the Philistines, and said, Send away the ark of the God of Israel, and let it go again to his own place, that it slay us not, and our people: for there was a deadly destruction throughout all the city; the hand of God was very heavy there.” – (1 Samuel 5:11)

“And they sent messengers to the inhabitants of Kirjathjearim, saying, The Philistines have brought again the ark of the LORD; come ye down, and fetch it up to you.” – (1 Samuel 6:21)

In our reading today we see the ark of God being taken from the Israelites by the Philistines; and then we see the voluntary return of the ark back to the people of Israel. Nobody seemed to want the ark. The story begins in chapter where the Israelite are losing in battle to the Philistines. The elders of Israel come up with the idea of getting the ark and bringing it to the battles because “it” would help them. Notice carefully the use of the word “it”. They were trusting in God to help them, they were trusting in a “good luck charm”. The Philistines seemed to have a better understanding of what the ark represented. They knew that the ark represented a powerful God, and though they did not know Him, they feared Him, and God gave them the victory and the ark. The moral to that part of the story is that God is not your good luck charm.

Once the ark was brought into the land of the Philistines, however, they began to experience some major problems. They put the ark of God in the Temple of Dagon. God does not like to share His glory with anyone so He knocked over Dagon, and chopped off his head and hands. To make matters much worse the people of city of Ashdod are all plagued with “emerods”. Now I don’t want to be graphic on this site, so I won’t go into deep explanation as to what emerods are, but I will tell you this: they can be helped with a little “Preparation H”. However, since the people of Ashdod didn’t have Preparation H at the time, or a CVS to buy it from, they opted to just get rid of the ark.

The ark then travels to two more cities of the Philistines where the same thing happens, so the Philistines wisely decide to send the ark back to Israel, along with some golden mice and emerods. Now that the ark is back in Israel, into the city of Bethshemesh, the people of Israel are very happy. Their happiness subsides, however, when they decide to take a little peek inside the ark. Not smart. About 50,000 of them died that day. They knew better. So the people that were left of Bethshemesh decided also to get rid of the ark, and they sent it to Kirjathjearim, where it remained for many years until David comes to get it.

We see here what happens when people dabble with the things of God, but do not actually know God. God gave clear instructions to the people of Israel as to the ark of the covenant. They should have known better. God will be worshipped on His terms or He won’t be worshipped at all. These people didn’t want God around them because they refused to submit to His Lordship. People are the same way today. They will not submit to God, so they would rather just not have Him around. And Christians who ought to know about God are so Bible ignorant that they have no clue what He expect from their lives. We need to get back into the Word of God in order to find out what God wants, and then we need to submit ourselves to His will.

Awesome post Pastor,well put.As Christians and none believers God is not to be mock.