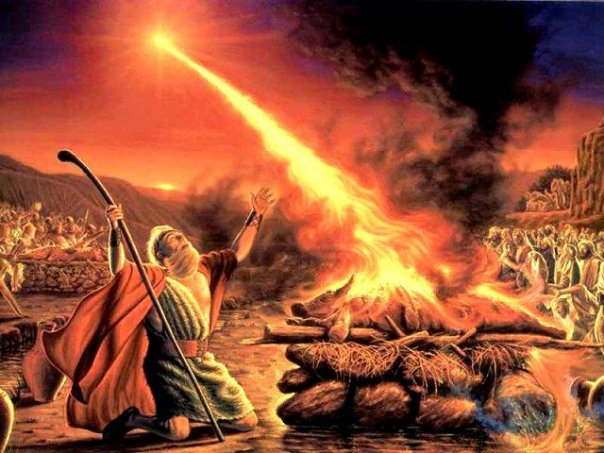 Read the “0426 Evening and Morning” devotion for today, by the late Charles Haddon Spurgeon

In 2 Kings 2, Elijah passes the mantle on to Elisha, and he is caught up to Heaven. Presumably, 2 Kings 1 is recording an event that took place shortly before the Lord took Elijah home to Heaven. You will remember also that back in 1 Kings 19, Elijah was discouraged, and on the run from Jezebel, and had requested that God take his life from him. He was down and depressed, but not out completely. It appears that though Elijah was discouraged in 1 Kings 19, he had picked himself back up, and was still calling down fire from Heaven right up until the Lord took him home. The ministry can be very discouraging at times, but we must not quit. Elijah didn’t.

In our passage today in 2 Kings 1, Elijah calls down fire from Heaven twice and destroys one captain and 50 men that were sent from King Ahaziah to apprehend him. Elijah had previously sent word to the wicked king that his days were numbered, and the king wanted to speak to Elijah personally about it, so he sent an army to get him. Elijah didn’t feel “lead of God” to go, so he called down fire and destroyed the army. The king then sends another captain and another fifty men, and Elijah does the same thing. A third captain and another fifty soldiers are sent, but this time they very humbly beg Elijah to go with them, and Elijah does so. However, the message to the king does not change, and Elijah personally tells Ahaziah that he is about to die. My point is that God was still demonstrating his power, and declaring his message through Elijah right up until the end of his life.

I am thinking this morning about some men of God in our day that are still being used of the Lord in a tremendous way, even though they are well past the retirement years. I pray that I will still be in the game like Elijah, and like these men today, at the end of my life. I know my job description may change somewhat, but I do not wish to ever retire. I want to just keep going, doing what I am doing now, right up until the chariots come for me.

Thank you Preacher for another great blog. Amen.

Amen Preacher, may the good Lord answer your prayer and give you many, many more years of service, God Bless.