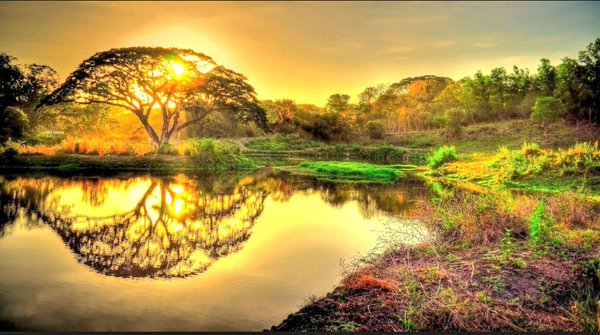 Read the “0202 Evening and Morning“ devotion for today, by the late Charles Haddon Spurgeon.

“Then a cloud covered the tent of the congregation, and the glory of the LORD filled the tabernacle.” – (Exodus 40:34)

“And there came a fire out from before the LORD, and consumed upon the altar the burnt offering and the fat: which when all the people saw, they shouted, and fell on their faces.” – (Leviticus 9:24)

“Then the fire of the LORD fell, and consumed the burnt sacrifice, and the wood, and the stones, and the dust, and licked up the water that was in the trench.” – (1 Kings 18:38)

The first two verses referenced above deal with the event that is taking place in Exodus 40, the dedication of the Tabernacle. Moses and the people of Israel have completed all that God had asked them to do regarding the construction of the Tabernacle. They had followed God’s instructions perfectly, building everything precisely as God had showed Moses. They anointed Aaron and his sons, and now everything is ready for God to put His blessing upon it. Exodus 40:34 tells us that the glory of the Lord filled the Tabernacle. Leviticus tells us that a fire came down from Heaven. You will notice that 2 Chronicles tells us that later in Israel’s history, in the days of King Solomon, that the fire fell again when they dedicated the Temple. It also fell in the time of Elijah when God was showing the people of Israel His power on Mount Carmel.

I remember years ago when Pastor Rick Wedemeyer and a handful of people first started the Christian Bible Church in South Tom’s River. There is no better way to state it than to say that in those early days the church was “on fire”. It was new, and it was fulfilling the purposes of glorifying the Lord and winning souls for Christ. The people were committed wholly to the Lord and His will for their lives. And the fire fell. God put a zeal, a fervor in the hearts of those people; and within a very short time the church had grown as many people were saved; and converts were being discipled and getting involved  in the service of the Lord.

I also have seen the fire of the Lord fall upon our ministry here at Jersey Shore Baptist Church, but unfortunately it has only been at certain seasons, and for a limited time. There have been times when the people were revived, and very zealous for the work of the Lord. Then there have been other times when the church seemed very lethargic. I pray constantly for the Lord to revive me, and our people; that He will once again set us on fire for His work, and His glory. I believe if God’s people will separate themselves from the world, and then dedicate themselves to the Lord and His purposes, the fire will fall once again. It really is all about what we desire. In our passage, the people of Israel were wholly focused on the Lord. And the fire fell. And if we were to wholly focus on the Lord in our lives and ministries, we would also see the fire of God fall to bless His work. Remember when you first trusted Christ as your Saviour? You were probably more “on fire” than you are now. I don’t know why, but it just happens that Christians, as well as churches, cool off in their spiritual zeal. However, now that we recognize that the fire in our hearts is not blazing as it once was, let’s confess our apathy to the Lord, and then ask Him to stoke the embers of our hearts and revive us. And the fire will fall once again.

Posted in Thoughts from Exodus by Phil Erickson with no comments yet.
0 0 vote
Article Rating
Subscribe
Login