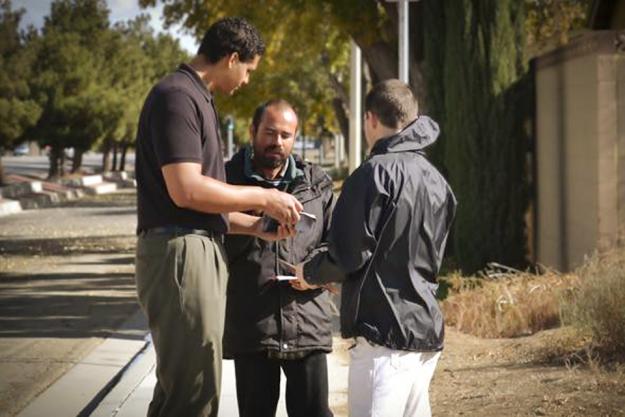 Read the “1101 Evening and Morning“ devotion for today, by the late Charles Haddon Spurgeon.

All three of the chapters that we have read this morning, there is a soul winning illustration. I understand that the proper interpretations of theses passages does not primarily involve the church and winning people to Christ, but I think you will be able to see the practical application.

1  In chapter 14 I see the Compelling of the soul winner.

“And the lord said unto the servant, Go out into the highways and hedges, and compel them to come in, that my house may be filled.” (Luke 14:23)

I have noticed that we have gotten to the point in our soul winning presentations that we are almost apologizing for bothering people. If you got word that there was an explosive device about to detonate in your neighbors house, would you apologize for bothering them? No, you would compel them to leave the house immediately. We need to take our soul winning presentations up another notch: we need to go beyond mere bidding (inviting) and start compelling people to trust Christ. I think our problem is that we deep down inside really don’t believe it all, or we really don’t believe time is running out.

2  In Chapter 15, I see the Compassion of the soul winner.

“And he arose, and came to his father. But when he was yet a great way off, his father saw him, and had compassion, and ran, and fell on his neck, and kissed him.” (Luke 15:20)

The father had the right attitude. He was longing for the return of the son. He was ready to receive him whenever he “came to himself”. The older brother, on the other hand, had the wrong attitude. He was not too excited about the reconciling of the younger brother to the father. He was perfectly content keeping the situation as it was. After all, the younger brother didn’t deserve another chance. He made his bed, and now he should have to sleep in it. Is that your attitude toward the lost soul that desperately needs Christ, or the wandering saint that needs to come back. We need to have compassion on people. We need to love them as Jesus loves them.

3  In chapter 16, I see the Consequences of not soul winning.

Now I cannot to be sure that the rich man had no man in his lifetime that attempted to reach him, but let’s assume that he did not. What a shame that not only this man, but also his five brothers will spend eternity in Hell because of a lack of soul winning. Let me remind you, they are without excuse. God’s law was written in their hearts; they could see God in creation; and there were synagogues on every corner just as there are churches on every corner today. But how much better were his chances for salvation had somebody had compassion on him and attempted to compel him to be saved.

Posted in Thoughts from Luke by Phil Erickson with no comments yet.
0 0 vote
Article Rating
Subscribe
Login