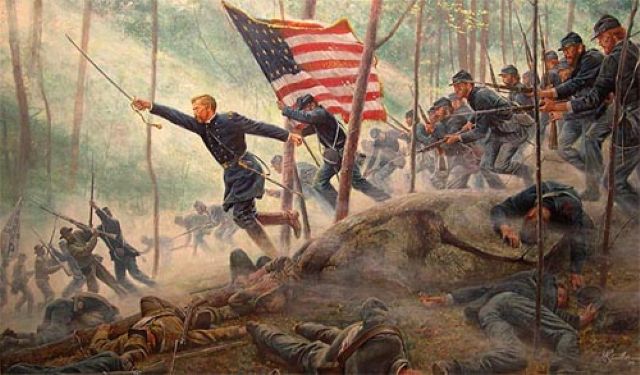 Read the “0320 Evening and Morning” devotion for today, by the late Charles Haddon Spurgeon.

“And the people served the LORD all the days of Joshua, and all the days of the elders that outlived Joshua, who had seen all the great works of the LORD, that he did for Israel.” – (Judges 2:7)

“And also all that generation were gathered unto their fathers: and there arose another generation after them, which knew not the LORD, nor yet the works which he had done for Israel.” – (Judges 2:10)

“And they forsook the LORD God of their fathers, which brought them out of the land of Egypt, and followed other gods, of the gods of the people that were round about them, and bowed themselves unto them, and provoked the LORD to anger.” – (Judges 2:12)

Years ago, my wife and I took a trip to Gettysburg, Pennsylvania to see the place where that great Civil War battle took place back in 1863. On the second day of the battle there were a group of men from Maine, lead by Colonel Joshua Chamberlain, who were entrusted with holding the southern end of the Union line at a place called Little Round Top. If the Confederate army could breach that line, or somehow get around it, they would have been able to defeat the Union army that day, and may have been able to win the war. Colonel Chamberlain, and the 20th Maine Volunteer Infantry Regiment held the line, and held back the Confederate Army. Toward the end of the battle, the Union army had run out of amunition, and were forced to repel their attackers with a charge down the hill with only their bayonets as weapons.

Our Scripture passage today in the Book of Judges tells us that when Joshua and the leaders from his generation were alive, they held the line against idolatry and immorality in the land of Israel. On their watch, they kept evil from creeping into the land. However, when Joshua’s generation died off, the next generation allowed all kinds of wickedness to enter into the lives of the people of Israel. They didn’t hold the line. It seems that, though Joshua and his contemporaries were good at leading the people in righteousness, they failed at training the next generation to do the same.

I made a similar observation this morning about our generation today. In America today there are many churches that are attracting large crowds, but unfortunately they are drawing people in by making their worship services as comfortable as possible to a lost world. Now, don’t misunderstand, I am not against people being comfortable in church, and I want people to enjoy their time at our services. However, I don’t want to compromise what I know to be right, in order to make lost people, or carnal Christians, feel more comfortable at our church. I am more concerned with the Saviour’s pleasure, than with the Seeker’s. Today, our churches have become so like the world, that there is little difference between Christians and the lost people around them. My point in all this is that I believe that by watering down everything that we stand for, and by opening the church doors wide to worldliness, we are going to lose the next generation. If we have only “a form a godliness”, what will our kid’s have? If we have to tickle the ears of people now to get them to come in, or keep them from going out, what will the next generation have to do?

We need to hold the line, and we need to work to raise a new generation of godly Christians that will be more sold-our, more separated, and better soul-winners than we are. If we don’t, America will be totally lost. Somebody’s got to hold the line.

Posted in Thoughts from Judges by Phil Erickson with no comments yet.
0 0 vote
Article Rating
Subscribe
Login