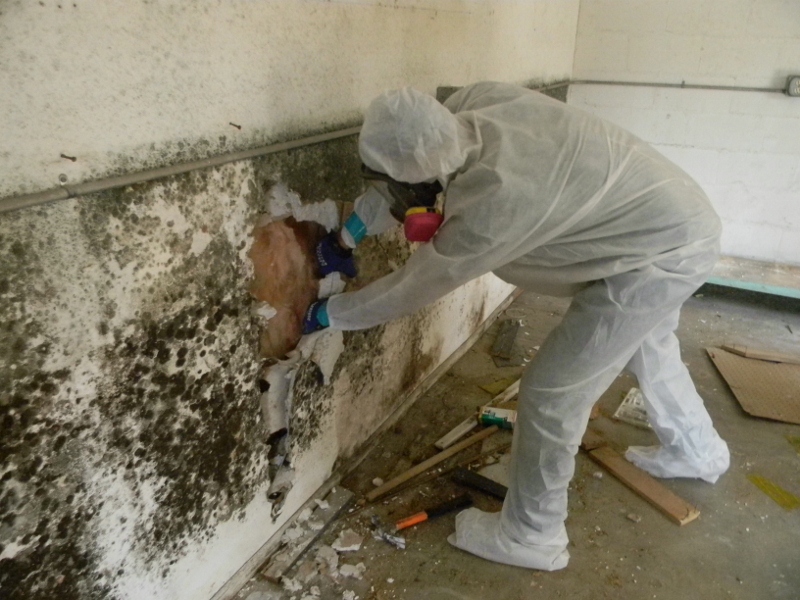 “When ye be come into the land of Canaan, which I give to you for a possession, and I put the plague of leprosy in a house of the land of your possession;” – (Leviticus 14:34)

As we continue reading in chapter 14 of the Book of Leviticus, we come across this curious passage that deals with leprosy within a house. This leprosy spoken of here would not be what is commonly called leprosy today (Hansen’s Disease); but rather this leprosy that appears on the walls of a house seems to be a type of mold or mildew. I remember when I was in Bible College down in Longview, Texas, there was a man there that was on the staff of the college that had purchased a beautiful home, but shortly after moving in they discovered that there was a mold problem in the house. Now I’m told that some types of mold can be very dangerous, and can cause many physical problems for people that come in contact with it. Anyway, this dear brother and his family had to eventually move out of the house for several months until the mold was completely removed from it. From what I understand this was no easy undertaking either. I believe if I remember correctly, that most of the drywall had to be removed and replaced after the framework was cleansed.

We have had a little trouble with mold in our old house in Galloway as well. We had to completely “gut” two of our bathrooms during our time there. One thing that I have learned about mold is that, like leprosy, it starts out very small; and often can be growing within the walls, as well as without. In fact, it probably grows better inside the walls where there is no light and perhaps a little moisture. In the right conditions, and if left untreated, it will quickly spread. It must be removed early and completely.

Even though this leprosy is not the same physical disease that was spoken of involving humans, it is still a picture of sin. We must be careful that we are vigilant about keeping sin out of our homes. We must watch for it, and remove it as quickly as possible; and then strive to keep the area as clean as we possibly can. If sin is allowed to multiply and grow, it will eventually destroy our homes from within. When it gets that bad, it will require much more than a little cleaning. We will have to “gut” areas, or possibly the whole home. It will take major reconstruction to fix the problem. Don’t let sin gain this kind of a foothold in your home. Nip it in the bud as early as you can.

I want to challenge to think for a moment about your home. Ask God if there is anything in your home that needs to be removed and cleansed. If there is, do it now, before it grows into a huge problem that may not be easily fixed.

“And a woman having an issue of blood twelve years, which had spent all her living upon physicians, neither could be healed of any, Came behind him, and touched the border of his garment: and immediately her issue of blood stanched. And Jesus said, Who touched me? When all denied, Peter and they that were with him said, Master, the multitude throng thee and press thee, and sayest thou, Who touched me? And Jesus said, Somebody hath touched me: for I perceive that virtue is gone out of me. And when the woman saw that she was not hid, she came trembling, and falling down before him, she declared unto him before all the people for what cause she had touched him, and how she was healed immediately. And he said unto her, Daughter, be of good comfort: thy faith hath made thee whole; go in peace.” – (Luke 8:43-48)

Notice in chapter 15 the instructions given regarding a woman who had “an issue of blood” that continued beyond the normal period. She was to be separated from everybody, and had to constantly wash everything she came in contact with. Notice the New Testament reference (above) of the woman that was healed by the Lord Jesus after having an issue of blood for twelve years. I am not sure if she strictly observed all of the rules mentioned in Leviticus involving her separation, but I am very sure that her disease was not only very debilitating physically, but also caused her a great deal of problems with her relationships with people. I am sure she was somewhat isolated from family and friends. Can you imagine finally being pronounced “clean” by the Lord Jesus Himself, after twelve long years. By the way, Jesus wasn’t troubled at all by the touch of this “unclean” woman. Sometimes we have to rub shoulders with people that are “unclean” in order to help them. Just a thought.

Posted in Thoughts from Leviticus by Phil Erickson with no comments yet.
0 0 vote
Article Rating
Subscribe
Login