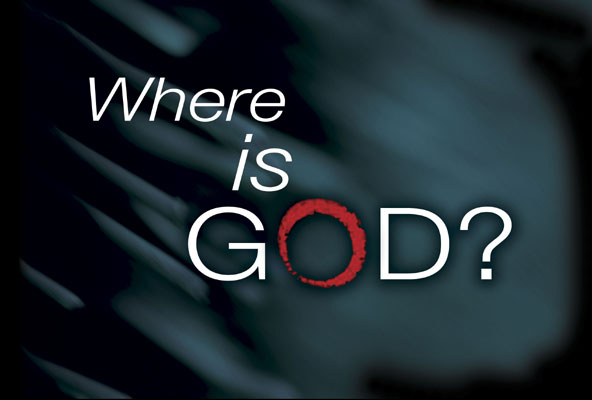 Read the “Evening and Morning“ devotion for today, by the late Charles Haddon Spurgeon.

“Blow the trumpet in Zion, sanctify a fast, call a solemn assembly: Gather the people, sanctify the congregation, assemble the elders, gather the children, and those that suck the breasts: let the bridegroom go forth of his chamber, and the bride out of her closet. Let the priests, the ministers of the LORD, weep between the porch and the altar, and let them say, Spare thy people, O LORD, and give not thine heritage to reproach, that the heathen should rule over them: wherefore should they say among the people, Where is their God?” – (Joel 2:15-17)

“Wherefore should the heathen say, Where is their God? let him be known among the heathen in our sight by the revenging of the blood of thy servantswhich is shed.” (Psalm 79:10)

Have you ever asked the question, “where is God?”  I have often heard the people of this world ask this question when bad things happen on the earth. They will say that if there was a loving God, He would not allow all of this evil in the world. I have also heard some of the people of God pose the same thought when they or somebody they care about are experiencing hardship in life. However, the context of the verse written above is a little bit different. In our passage, the people of God have strayed far away from His will. Judgment has already come, and more judgment is on the way, and the prophet is pleading with the people to turn back to God. Notice that he wants all of the people: men, women, and even the little children to gather together. He doesn’t want any of them to not be in their place. That’s a good place to start, isn’t it. Many of God’s people today have forsaken the church house, which is “the house of the living God” for us today. Then the prophet says that the priests are to plead to God for the people. God wanted this congregation of Israel to understand that they needed to recognize that they have strayed; and then repent and turn back to God. We need to do the same thing today.

My thought for this morning, however, is that I wonder how many of of the people around us: our neighbors, our co-workers, our family members, etc. can see God in our lives.  Can they see the reality of our faith working throughout our day to day living. Maybe they are tolerant and even polite to us regarding what we say about our faith; but I wonder sometimes if they aren’t secretly thinking, “where is their God?” Can they see the reality of God in our lives?  No wonder we are having a difficult time reaching the people around us. If God isn’t real to us, how can he reveal Himself to others through us. I believe we have a tremendous responsibility and an awesome opportunity to show people our God through our lives.

1  Show them God by living out your faith.  If you really believe God, then live according to the principles found in His Word.  Walk with Him daily.  Yield to His Spirit and His will.  Separate from the things that are not apart of His perfect plan for your life.

2  Show them God by loving the people around you.  God loves people, unlovable people just like you.  Demonstrate the reality of God by demonstrating God’s love to people.  Look for ways to express the love of God to the lost world around you. Don’t take separation beyond where God intended it to be.  He wants us to impact their world; not only with the truth, but also with compassion.

3  Show them God by lasting. A lot of Christians start out their race, and do pretty well for a while, but eventually drop out. When a Christian throws in the towel on his faith, he is telling the world that his God was not real. When I first got saved years ago, my brother said to me that he didn’t think this new life of mine would last. He thought it was just a phase that I was going through; but now I think he has come to realize that my God as well as my salvation is very real. The greatest compliment a person could give me would be for them to say that they saw the reality of God in my life.

Amen Pastor.I have had people tell me I was a nice person and that I was a good man, but never saw the reality of God in me also ,or that I was a Godly man.Maybe I will never reach that point in my Christian life but I will try to be the best that I can serving God. Like the post.