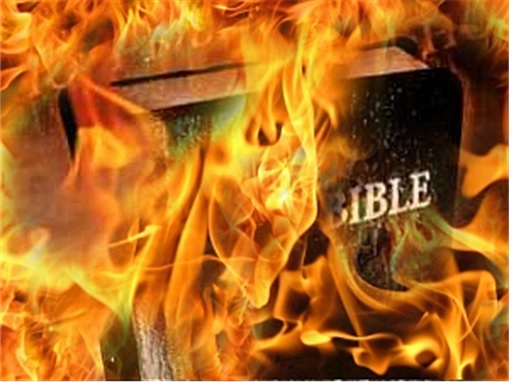 Read the “0823 Evening and Morning” devotion for today, by the late Charles Haddon Spurgeon.

“Then took Jeremiah another roll, and gave it to Baruch the scribe, the son of Neriah; who wrote therein from the mouth of Jeremiah all the words of the book which Jehoiakim king of Judah had burned in the fire: and there were added besides unto them many like words.” (Jeremiah 36:32)

When Jeremiah the prophet wrote down the words that God had given him to deliver to the people to Judah, it was ultimately given to Jehudi to be read before King Jehoiakim. The king did not like was written about him by God through Jeremiah, so he took out a knife and cut the book in little pieces, and then threw it into the fire. However, this did not stop God, or Jeremiah. He just wrote another copy of what was previously written, and then added a few more things regarding the judgment that God intended upon the nation and particularly King Jehoiakim. The king tried to get rid of the judgment by removing the Word of God, but he could not eliminate the Word or what it says by burning it.

I find this is what many in our world are doing today. They attempt to hide from the Word of God by removing it from their sight. They figure that if they could just get rid of the Bible, and those that preach it, they could somehow escape the revealed judgment that God has declared against those who live in rebellion to Him. However, their attempt to remove the Word is futile because the minute you try to destroy it in one place, God will just raise it back up again from somewhere else. The communists in Russia, China, and other places have attempted to suppress the Word of God; but have failed miserably. In fact, in China where the Bible has been outlawed, there are millions of copies of the Word being circulated underground, which God is using to bring an incredible revival.

There also some, who having realized the futility of eliminating the Word, have attempted to alter the Word, changing it to meet their agenda. Their claim was that the words needed to be updated and modernized in order to continue to be relevant in an ever-changing culture. When I was saved back in 1990, I went to the Christian book store to buy a Bible. I had no idea what to buy. The clerk tried to sell me one of the modern versions, but for some reason I was drawn to a beautiful, leather-bound copy of the King James Bible. I am thrilled that God led me to the old King James. It has been a tremendous blessing to me and my family through the years. I have never doubted that the Book that I carried was an accurate copy of the very words of God. Stick with the Book!

There are also some preachers and churches that have essentially done the same thing that Jehoiakim did. No, they did not burn the Bible, but they did stop preaching it. Their worship services may include part of an altered verse, or two; but, for the most part, they gather together infrequently to watch movies, and listen to ear-tickling homilies about the love of God, without a word being preached against sin. Churches that once had vibrant Sunday Schools, and Bible studies throughout the week are now barely meeting together at all, and when they do, there is very little of the Bible being preached.