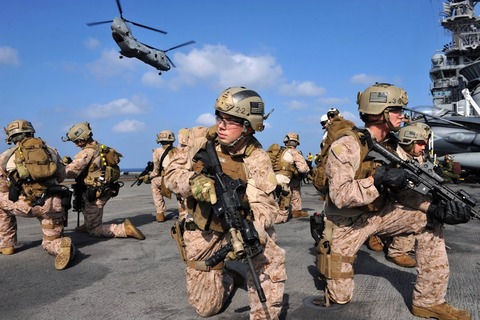 Read the “0508 Evening and Morning” devotion for today, by the late Charles Haddon Spurgeon

“And the sons of Tola; Uzzi, and Rephaiah, and Jeriel, and Jahmai, and Jibsam, and Shemuel, heads of their father’s house, to wit, of Tola: they were valiant men of might in their generations; whose number was in the days of David two and twenty thousand and six hundred.” – (1 Chronicles 7:2)

1 Chronicles 7 contains the genealogies of several of the tribes of Israel, and lists many of the heads of the families that were alive when the Israelites were moving into the Promised Land during and after the time of Joshua. As you will recall, this land was full of the enemies of God’s people, and they all had to be removed from the land. In addition to the above verse, four times in this passage of Scripture the phrase “men of valour” is used to describe these men. I looked up the word “valour” in the dictionary, and it defines it as great courage in the face of danger. Some of the synonyms listed in the thesaurus for the word “valour” are bravery, courage, pluck, nerve, and fearlessness. I admire men who rise to the challenge and are willing to risk their lives for a greater cause than their own personal safety. God raised up these “men of valour” in Israel at a time when the people of God were facing incredible obstacles while claiming the inheritance that God had given them.

I remember the daring assault by the US Navy Seals in Pakistan which resulted in the removal of Usama bin Laden. These Seals are incredibly brave men, who are often asked to put their lives in great danger for the cause of liberty. I am very thankful for men who will lay their own safety on the line so that my family is kept safe. In a few weeks we will be observing Memorial Day. For many years this holiday meant little to me. For the most part it was a day for hamburgers, hot dogs, and potato salad; and a time to have barbecues or picnics with friends and family. But as I get older, and I look at my children and the opportunities they have here in this great nation, my mind is forced to think about the brave men and women who made it all possible for us. I would like to thank all of you who might be reading this thought this morning, who may have served our nation in the armed forces. You are truly men and women of valour.

While I am thinking about valiant men and women, I would also like to thank all of those who are serving out in the public today in the midst of this COVID-19 pandemic, especially those that are risking their lives in the healthcare field.

As I was reflecting on my admiration of the men from this passage, and my appreciation for the men and women in America who keep us free, I was also challenged to consider what my contributions have been to make our country a better place. What sacrifices have I been willing to make so that life could be better for my family and neighbors? I want my life to make a difference as well. I don’t think that I will ever be called upon to go into a physical battle against some opposing army, but perhaps I can do some spiritual battle with the forces of darkness. I can also sacrifice some of my time, talent, and treasures to help people in a tangible way. Maybe there is something that you can do as well.

Thank you everyone who serve our country in one way or another. Amen.

Amen Pastor. Freedom isn’t free.There is a high cost ,I know because I have looked into the faces of many of my Brothers who didn’t come home.Thank you for the post Pastor.