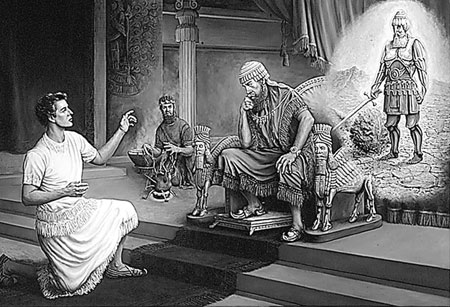 Read the “0916 Evening and Morning“ devotion for today, by the late Charles Haddon Spurgeon.

And at the end of the days I Nebuchadnezzar lifted up mine eyes unto heaven, and mine understanding returned unto me, and I blessed the most High, and I praised and honoured him that liveth for ever, whose dominion is an everlasting dominion, and his kingdom is from generation to generation: And all the inhabitants of the earthare reputed as nothing: and he doeth according to his will in the army of heaven, and among the inhabitants of the earth: and none can stay his hand, or say unto him, What doest thou? (Daniel 4:34 & 35)

But hast lifted up thyself against the Lord of heaven; and they have brought the vessels of his house before thee, and thou, and thy lords, thy wives, and thy concubines, have drunk wine in them; and thou hast praised the gods of silver, and gold, of brass, iron, wood, and stone, which see not, nor hear, nor know: and the God in whose hand thy breath is, and whose are all thy ways, hast thou not glorified: (Daniel 5:23)

I make a decree, That in every dominion of my kingdom men tremble and fear before the God of Daniel: for he is the living God, and stedfast for ever, and his kingdom that which shall not be destroyed, and his dominion shall be even unto the end. (Daniel 6:26)

In the three chapters that we have read today, we have the accounts of three different kings: Nebuchadnezzar of Babylon; Belshazzar of Babylon; and Darius of Persia. Each of these kings came to know that the God of Heaven was the only God of the universe. Each of these kings came to know this under different circumstances. The first king we saw (Daniel 4) was Nebuchadnezzar. He had already seen the power and supremacy of our God in the events that are recorded in the first three chapters of Daniel. Somehow, however, he forgot that it was God who buttered his bread; and began to think that it was he who was the source of his own success. The last straw was in v 30, “Is not this great Babylon, that I have built for the house of the kingdom by the might of my power, and for the honour of my majesty?”. God had to greatly humble him. It is a principle of God that he humbles those who exalt themselves. Praise God, though, that He gave Nebuchadnezzar another chance, and He allowed him to be restored. Nebuchadnezzar did not make the same mistake twice: he gave God the glory for all that he was able to accomplish in the kingdom.

The second king we saw (in chapter 5) was Nebuchadnezzar’s “son” who appears to have never come to the place where he voluntarily submitted himself to the God of Heaven. He actually got so bad that he drank from the cups that were taken from the Temple of God: cups that were reserved only for the priests in the service of God. God revealed Himself to Belshazzar by writing his doom upon the wall. Shortly thereafter the the prophecy from the writing was fulfilled when the Persian empire came in and conquered the city of Babylon.

The last king that we read about (in chapter 6) was Darius from Persia. It seems that Darius had a great respect at least for God, though it did not appear that he worshipped him. Because of a mistake that he made, Daniel ended up in the den of lions; but somehow Darius knew that God would deliver him. He actually ended up making it official in the kingdom that everyone was to worship God.

The common denominator for all of these kings, however, is Daniel. Daniel was a steady witness; a powerful, uncompromising voice in all three of these kingdoms. He never wavered and he never yielded to the worldly influences around him. Even though he was in captivity, he was always blessed of God, and favored by each of these kings. His story is similar to Joseph’s in many ways. Let’s learn from the example of men like Daniel and Joseph, and let’s live for God; even in times when the whole world is going in the wrong direction. There will be opportunities to demonstrate the love and power of God before a lost world. When they need God, they will look for someone who they know has consistently walked with Him, like Daniel.

Amen Pastor. I think as Christians we all could use a little bit of Daniel in our daily walk with God.