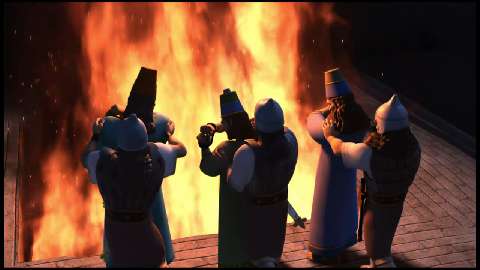 Read the “0915 Evening and Morning” devotion for today, by the late Charles Haddon Spurgeon.

“If it be so, our God whom we serve is able to deliver us from the burning fiery furnace, and he will deliverus out of thine hand, O king. But if not, be it known unto thee, O king, that we will not serve thy gods, nor worship the golden image which thou hast set up.” (Daniel 3:17 & 18)

I enjoy reading every part of the Bible, but I have really been looking forward to getting into the Book of Daniel. These first three chapters, and the stories of Daniel (Belteshazzar), Hananiah (Shadrach), Mishael (Meshach), and Azariah (Abednego) were a great source of strength and encouragement to me today. I may not be facing trials and burdens that could be compared to what these young men faced, but I figure if they had faith enough to stay true to the Lord during their big ordeals, then I certainly should be able to muster enough faith to handle the little tests and problems that have come my way. These were great young men of faith, whose strength and trust in the Lord caused them to stay true to the Lord when all others compromised; and it also allowed them to stay cool when faced with the trials of their life.

In chapter one, we see the four men having a good attitude in a very bad situation. They were taken captive into the strange land of Babylon. We have no idea what happened to the rest of their families; but they may have been left behind, or possibly even put to death. These men were the cream of the crop from Israel: they were smart and well favored physically; but these gifts were not the traits that caused them to stand out from the crowd: it was their faith in God that distinguished them from everybody else. They were given a diet of the best meat and wine from the king, however the meat that the king gave them was most likely sacrificed to some pagan God. Daniel and his companions requested pulse (vegetables) and water as they did not want to compromise their faith in God by eating that which was sacrificed to an idol. The prince reluctantly agreed to accommodate them but only as long as they gave no appearance of being weak and thin. God prospered them with their vegetarian diet and they grew stronger than those that ate the meat.

In chapter two, we see them face an even greater test. The king had a dream and he wanted somebody to tell him what it meant. He made it really hard for the “wise men” in that he would not even reveal the dream: they not only had to give the meaning, but they also had to tell the king the events of the dream. This put most of the kings soothsayers out of business, and got the king mad enough to give all of the “wise men” including the four Hebrew boys a death sentence. Daniel did not panic; he prayed, and God gave him the answer to the king’s dilemma which saved his life and the lives of his three companions. It also gave them great favor in the sight of the king, and elevated them in position above all of the rest.

In chapter three, we see the stakes are raised even higher. The king has passed a new law that states everybody needs to bow to the new statue that he has made. Of course the boys refuse to bow to anything but their God. Once again the king is furious. (Kings don’t like it when the people listen to any other power but theirs) Their sentence this time is to be thrown into the fiery furnace. They trust that their God is well able to deliver them, so they continue refusing to bow to the image. The king throws them in, but miraculously God saves them, not from the fire, but in the fire. Sometimes God allows us to go through the trial: He doesn’t always deliver us from them; but His grace is always sufficient.

These are amazing, encouraging, motivating accounts of great faith. I want to have the strength of faith that these boys had. How about you? Is your faith strong or weak today? Well, did you spend time today in the Word of God? So then faith cometh by hearing, and hearing by the word of God (Romans 10:17) There is a direct correlation between the time spent in the Word of God, and your strength in trials. Why not allow God to strengthen you today through His Word?

I always love to read this story of Daniel & his 3 friends. Especially the part in vs 27 where they mention that not only did they come out alive, which is certainly the biggest part, but describe how they weren’t even phased in looks or smell & even their clothes were untouched. God has mighty power to save but takes his miracles & blessings even further than that. We are blessed