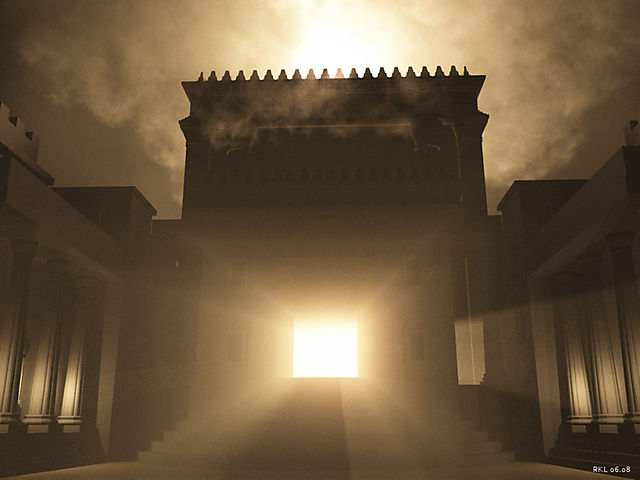 Read the “0912 Evening and Morning” devotion for today, by the late Charles Haddon Spurgeon.

“Afterward he brought me to the gate, even the gate that looketh toward the east: And, behold, the glory of the God of Israel came from the way of the east: and his voice was like a noise of many waters: and the earth shined with his glory. And it was according to the appearance of the vision which I saw, even according to the vision that I saw when I came to destroy the city: and the visions were like the vision that I saw by the river Chebar; and I fell upon my face. And the glory of the LORD came into the house by the way of the gate whose prospect is toward the east. So the spirit took me up, and brought me into the inner court; and, behold, the glory of the LORD filled the house.” – (Ezekiel 43:1-5)

I enjoyed reading this morning the continued description of the Millennial Temple and the worship that will take place during the Millennial Kingdom. I find it interesting that it appears that some of the sacrifices (like the Passover) will be re-instituted during this time. I often wondered why there would be sacrifices at this time. Then it dawned on me that there was never a “need” for the sacrifices. What I mean is that they never took away sin; they just served as a symbol or a picture of Christ’s coming sacrifice on Calvary. However, during the Millennium, they will no longer point forward to Christ; they will serve as a reminder, a memorial of Christ: much like the Lord’s Supper does for us today.

However, the thing that really excited me this morning was the thought of the glory of God passing through the eastern gate. You may recall that Christ came through the eastern gate when he rode in Triumphal Entry. That was certainly glorious, however, at that time Christ was veiled in humanity, and His glory was not evident to many who saw Him;  but at the end of the Tribulation when Christ begins His Millennial reign (after putting down all opposition), He will bust through these gates and set up  His Kingdom on earth. Imagine what that will be like. I want to see it up close. I don’t know about you, but I am tired of a world that spits in the face of God. I am tired of mosques being built where the temple should be. Don’t misunderstand, I am not advocating violence; but I long for the day when Christ puts an end to all of this nonsense. Even so, Come Lord Jesus.

A practical application for today from this passage surrounds that phrase in v 5, “the glory of the Lord filled the house”. The glory of the Lord comes with His presence. I want to experience the presence of God in our local church every time I come to worship. Isn’t it a wonderful thing when the Lord shows up while we’re at church. It is His house isn’t it? Unfortunately, there are many times that we come together for worship and the Lord’s glory isn’t as evident as it should be. I suppose there are many reasons why that is: it could be because their is bitterness and division within the church; it may be that there is too much carnality among the members; and it could be that the people are just not looking to meet with God. Whatever the reasons, it is a shame that God does not feel welcome in His own house. I want to experience the presence of God in my life, my home, and my church.

Amen Pastor. Climbing a board with you Pastor.