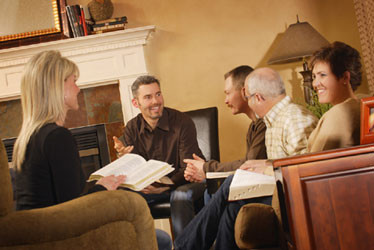 Read the “1029 Evening and Morning“ devotion for today, by the late Charles Haddon Spurgeon.

“Now the man out of whom the devils were departed besought him that he might be with him: but Jesus sent him away, saying, Return to thine own house, and shew how great things God hath done unto thee. And he went his way, and published throughout the whole city how great things Jesus had done unto him.” – (Luke 8:38-39)

“Howbeit Jesus suffered him not, but saith unto him, Go home to thy friends, and tell them how great things the Lord hath done for thee, and hath had compassion on thee.” – (Mark 5:19)

In today’s passage we read the familiar story of the man from Gadara who was gloriously saved and transformed by the Lord. This man was in bad shape: he was possessed with a legion of devils that caused him to wreak havoc, not only on himself, but also to the people around him. He was often locked up because on his insane condition. Finally, he was “driven of the devil into the wilderness”. When Jesus saved this man, he was completely changed, and when the citizens of the area found found him, they saw him in his right mind, fully clothed, and sitting at the feet of Jesus. What a great God we serve who so wonderfully saves people who are often considered by men to be without hope.

You would think that Jesus would want this man to travel all over Israel reciting his testimony, but that was not the case. The man had actually begged (besought) the Lord to let him go with Him. However, the Lord had a different plan for the life of this man: He told him to go home to his house and friends. The will of God for this man was going to be for him to be a testimony for Jesus in his own hometown. Perhaps he would eventually be a part of a local church; maybe he would be a teacher, or even a local pastor to his community. He certainly would be a spiritual leader in his own home to his family, and neighbors. He would be used of God to win souls for Christ where he lived.

The will of God for most people, after they are saved, will be to go home to their house and friends. Certainly, God will call some to go away to some foreign place of service, but for most of us, His will will be for us to make a difference where we are. Whether we serve him at home, or in some place away from home, it really doesn’t matter. Regardless of location, we are to win souls, and serve the Saviour in whatever capacity he deems for our lives.