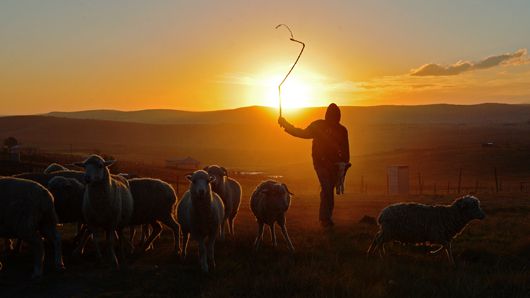 Read the “0827 Evening and Morning” devotion for today, by the late Charles Haddon Spurgeon.

“My people hath been lost sheep: their shepherds have caused them to go astray, they have turned them away on the mountains: they have gone from mountain to hill, they have forgotten their restingplace.” – (Jeremiah 50:6)

“The elders which are among you I exhort, who am also an elder, and a witness of the sufferings of Christ, and also a partaker of the glory that shall be revealed: Feed the flock of God which is among you, taking the oversight thereof, not by constraint, but willingly; not for filthy lucre, but of a ready mind; Neither as being lords over God’s heritage, but being ensamples to the flock. And when the chief Shepherd shall appear, ye shall receive a crown of glory that fadeth not away.” – (1 Peter 5:1-4)

In our Bible reading passage today from the Book of Jeremiah, God is sending His warning of judgment to the nation of Babylon because of their treatment of the nation of Israel. The interesting thing about this is that God actually allowed the Babylonians to conquer His people because the Israelites had turned their backs on Him. Notice the statement in Jeremiah 50:6: “My people hath been lost sheep: their shepherds have caused them to go astray”. Notice that God states very clearly here that the reason His people had gone astray was because the shepherds were not doing their jobs. The shepherds of Israel were the spiritual and political leaders who had lead the people of God into apostasy and immorality.

Our nation today is also failing due to the fact that the shepherds are not doing their jobs. Our political leaders are leading people in a godless path, and the spiritual leaders are not much better. There is little that I can do to influence the political direction of our country, but as one of God’s “under-shepherds”, I can do my part to see that the flock that God has entrusted to my care is healthy. But, what is the job of the “under-shepherd” (pastor) of a New Testament church?

1 Provide for the flock – “feed the flock of God which is among you” – It is the job of the pastor to make sure the people of the church are getting the whole counsel of the Word of God. The pastor should be making sure that the people are getting a healthy diet of sound Bible doctrine. Too many churches are limiting the tie that is spent in teaching and preaching, and are replacing it with forms of entertainment. I am not opposed to some of the other things that we do in our church services, but they should not replace the time spent in the Word. The further away our nation gets from God, the more we will need to be strengthened by the Word.

2 Protect the flock – There are a lot of things out there that will hurt God’s people. It is the job of the pastor to warn the people against false teachers who lead them astray doctrinally. We also have the obligation to stand strong and hold the line in the area of morality. The world, the flesh, and the devil are all pushing our churches into immodesty and immorality. It is the pastor’s job to see to it that carnality and worldliness are kept as far away from the church as possible. The pastor should also be the first one to offer help to the hurting and even the straying Christian.

3 Pattern for the flock – This is perhaps the area where we fail the most. Many times we do not practice what we preach. We are to be “enamples” to the flock. It seems that there has been a tsunami lately of moral failure in the pulpits of many of America’s leading churches. This both grieves me, and scares me. It grieves me because it has cause some of “the enemies of God to blaspheme”. In other words it has given strength to the crowd that opposes God. It scares me because I know that some of these men were far better Christians than I. I don’t want to fall. I must do whatever I can to stay humble, because moral destruction cannot come unless there is pride because pride always precedes destruction.

America is failing today. God’s people, for the most part are failing today, and it is all my fault because I am one of those “under-shepherds” that have been entrusted by God to watch out for the flock. Pray for the shepherds.