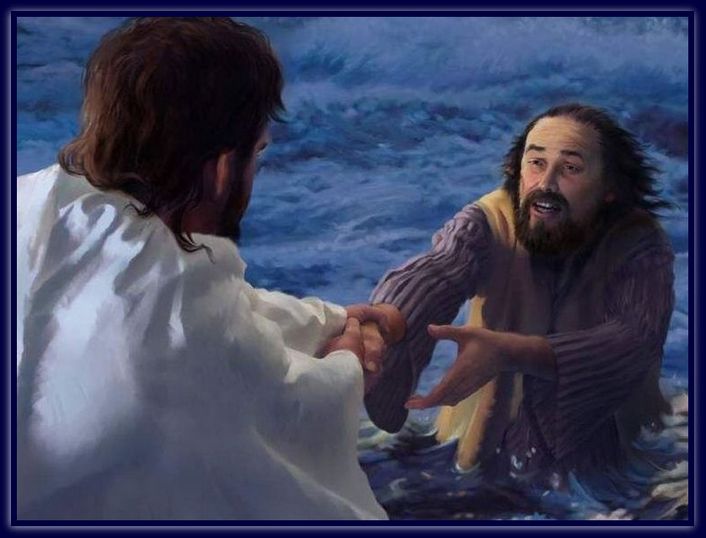 Read the “1010 Evening and Morning“ devotion for today, by the late Charles Haddon Spurgeon.

“But when he saw the wind boisterous, he was afraid; and beginning to sink, he cried, saying, Lord, save me.” (Matthew 14:30)

Just a quick thought this morning from today’s passage. The disciples were traveling by ship in the Sea of Galilee without the Lord. The Lord had stayed behind to get alone and pray. The Lord saw them through His omniscient eyes, and saw that they were struggling and frightened in a severe storm on the sea. He went to them, walking on the water. Peter sees the Lord walking on the water and he decides that he would like to try it as well. He asks the Lord’s permission to venture out on top of the waves. The Lord bids him to come, and he Peter does well for a short time until he loses his focus. While his eyes were on the Lord, he stayed afloat; but when he took his eyes off of the Lord and focused on the storm and the waves, he began to sink. Finally, he cries out to the Lord for help.

In the Christian life, there will be many storms. Some of these storms will be physical, some financial, some relational; but we will all go through the difficult days as we serve the Lord. Some of these storms will be self-inflicted, while others will be caused by others, and still others are beyond explanation. It really matters not where the blame lies as to the storm itself. The key to staying afloat in the storm, however, will be keeping our focus on the Lord Jesus. He allowed the storm in our lives for a purpose. It may be for our good; it may be for His glory; it may be for both. We need to trust the Lord and allow Him to see us through the storm.

I have seen this principle in action many times in my life. Each time a storm would appear in my life, I would spend a lot of time and energy trying to figure out how the storm started and who was to blame for the storm. Surely, it couldn’t be my fault, could it? God has shown me, however,  that most of the storms that I have experienced  were at least partially of my own doing. He also has shown me that the purpose of the storms was to teach me and grow me. I must confess, I always wanted to sink. I wanted to just throw in the towel, blame everybody else for my troubles, and move on in bitterness. Instead, I have learned to cry out to the Lord for help. He has always lifted me up, and helped me to make my way back into the ship. I thank the Lord for his mercy, grace, and patience with me.

Posted in Thoughts from Matthew by Phil Erickson with 2 comments.